From continent to counter-top: the origin of shea butter

Shea butter has gained worldwide recognition for its skincare properties, but it’s easy to forget that our generation is not the first to use it. Shea butter has a rich and fascinating history proving there is more to this trend than you may think.

Shea butter has become a hallmark of today’s beauty industry. Whether it’s in oil form, or used as an ingredient in shampoo, we have come to associate shea butter with soft skin, smooth hair, and a gorgeous fragrance that has resulted in exponential sales worldwide. But what is the magic behind shea butter? Is it just a trend, or is there something more behind this sweet-smelling phenomenon?

Where does shea butter come from?

Let’s start with the basics: shea butter is derived from kernels within the seedpod of the shea tree (Vitellaria Paradoxa, previously known as Butyrospermum Parkii ssp parkii). The natural habitat of the shea tree is in the dry savannah regions across Africa, and traces of the shea tree have been found dating back 4000 years in Egypt.

In the 14th century, Moroccan traveler Ibn Battuta, on a trip to Mali, was the first to describe and write the history of shea. He brought important historical and sociological information to his writings, and wrote about Africa's links with shea. He described it as, "A product of high value in regional trade across West Africa". A few centuries later, the famous Scottish explorer Mungo Park was the first Westener to go up the river Gambia. He added geographical and customary descriptions of the use of shea butter in African communities.

While the majority of modern products use the oil extracted from the shea seed, ancient African cultures had various medicinal and ceremonial uses for all parts of the tree. An interesting insight is that, traditionally, women are the sole owners of shea butter making know-how which is passed from generation to generation in both rural and urban areas.

To this day, there are many rituals surrounding the use and production of shea extract. For example, in the Kadiogo region of Burkina Faso, women often place a stem of grass on the edge of the pot while cooking butter to prevent the butter from being contaminated by evil spirits.

With modern manufacturing, these traditions may no longer be followed, but it’s understandable how shea became so revered and why such strong beliefs evolved around this plant. With so many different uses, shea plays an important role in the many cultures that have been using the plant for thousands of years. When you consider the incredible uses we have for shea today, it’s easy to understand why this plant has gained somewhat of a cult following.

Shea butter has a strong reputation for its chemical composition and its properties (moisturizing, softening, relaxing, protective, and revitalizing) which make it possible to produce body creams, ointments, and soaps.

Shea butter is also used to make massage products, wound treatments (burns) because it promotes healing. In traditional pharmacopoeia, all parts of the tree are in fact used for compositions capable of treating various ailments such as malaria and dysentery.

Shea is a slow-growing plant. This is another reason why the plants are so important and protected. It takes approximately 10 to 20 years for the first flowers to appear on the shea tree, and it is not until around 25 years that the tree bears fruit, which is where the seedpods are located from which the oil is extracted.

Shea butter has an incredibly important history across the African continent and its medicinal and beauty properties have been known, studied and cultivated for thousands of years.

So, it's safe to say that shea butter is not merely a trend. It is, in fact, one of the most ancient and respected substances in the modern-day skincare industry.

Are you as fascinated by shea butter and natural skincare as we are? Subscribe to our blog and we'll keep you updated each month with something new and exciting! We have also created a free checklist for you to download on the 15 things that you should never do to your skin, helping you keep your skin healthy. 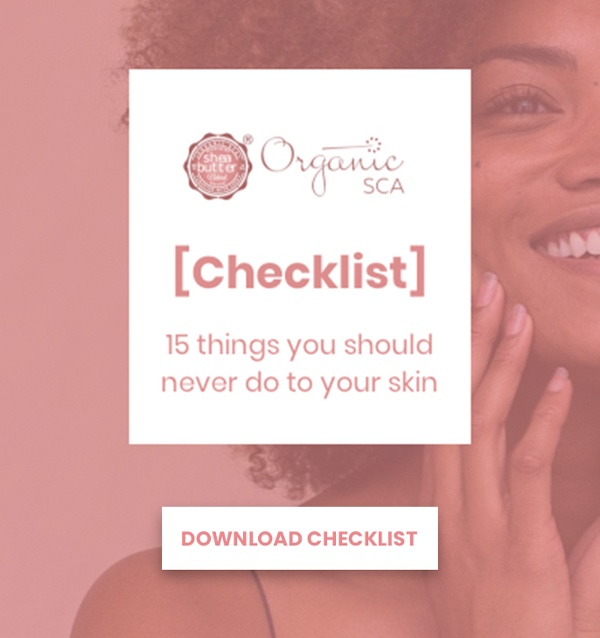 For authentic natural creams lovers. Organic SCA products are truly natural & do not use artificial penetration enhancers to drive ingredients deeper into the skin.